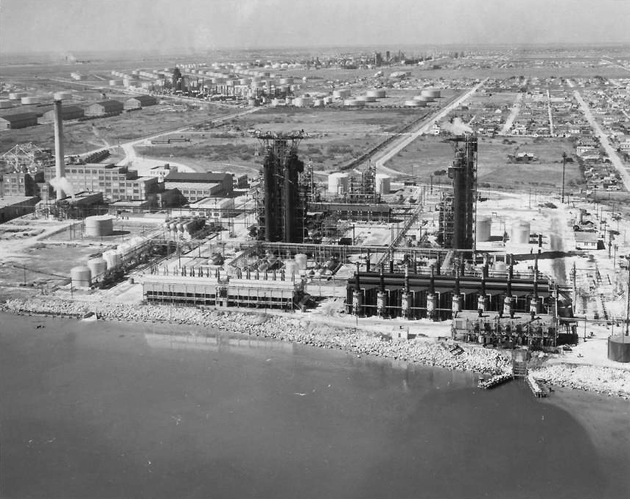 Refineries in Texas City.
Source: Moore Memorial Public Library, circa 1947.
During the 1940’s Texas City experienced tremendous growth. Texas City’s population was 5,687 in 1940. By 1947 the population was 16,000. Texas City would grow based on chemical and petroleum industries. The city attracted many new residents due to the abundance of high paying jobs.
"The growth of Texas City during the 40’s was attributed to the importance of the City’s port and industrial complex to the Allied war effort during World War II. Chemical and petroleum refining companies like Carbide & Carbon Chemical, Pan American Refining, and Monsanto all had plants located in Texas City."
-Amanda Vance, Curator at the Texas City Muesum1

During World War II, Texas City would experience its largest population increase. This was due to the increased priority on the American production of fuel, oil, and other supplies for the military.    ​ 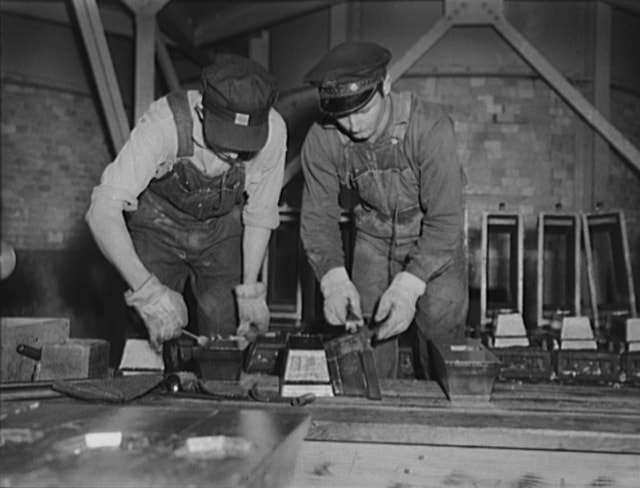 Workers at the Longhorn Tin Smelter.
Source: Library of Congress. cicrca 1943
"Before the war's end, the Longhorn Tin smelter was refining 44 percent of the world's supply of tin."2
Tin was a vital resource for the Allied forces. With existing sources of tin either under enemy control or too difficult to transport across dangerous passages, the United States government decided it was in their best interest to build a tin smelting factory on American soil. Texas City was chosen as the location because of the ease of access to the ocean. The Longhorn Tin smelter was the only tin smelter in North America.  ​
Source: Texas DPS Museum
Footnotes:
​1. Vance, Amanda. "Interview with Amanda Vance." Personal Correspondence. 11 Jan. 2019.
2. Benham, Priscilla. (1987). Texas City: Port of industrial opportunity. Houston, TX: University of Houston, 264-265.