Texas City Disaster Memorial in Memorial Park.
Source: Houston Chronicle
"That’s one of the things that has changed the way we do things as far as safety is concerned. Regulations-wise it created a lot of conversation on how to start communicating safety on those types of issues."
-Thomas Munoz, Texas City Emergency Manager1

Sources disagree on the exact number of deaths, however it is estimated that 500-600 people were killed in the explosion. An exact count of the dead was difficult to get because of the condition of many of the bodies. The number of wounded people is estimated to be in the thousands. There were also a number of foreign seamen laborers present who were unaccounted for. Workers from the Houston Identification Bureau, and the Department of Public Safety continued to identify bodies through June of 1947.
"[...]bound together by a great and common tragedy for which there is no ready word of solace." 2 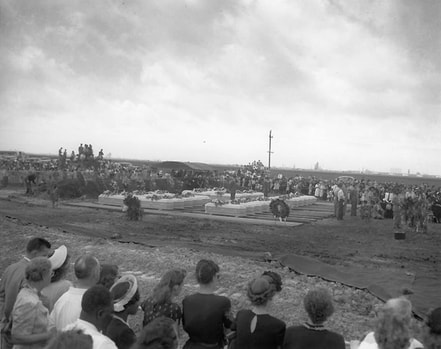 Funeral service for unidentified victims, held in Memorial Park on June 22, 1947.
Source: Moore Memorial Public Library.
"I look back and remember the gallant people who worked to bring back a little town whose people didn't know the meaning of quit or give up. Years have passed,  and this city continues to grow. But we shall always remember."
-L.B. Jr. Castanie, Survivor of the Texas City Disaster3
On June 22, the city held a funeral service for the unidentified victims of the tragedy. Sixty-three slate-gray caskets, each bearing a floral wreath, were arranged in six rows for the ceremony. About 5,000 survivors, family members of the deceased, reporters, corporate officials, and photographers attended the service.
On May 30, there was a memorial ceremony at the fire station on the corner of Ninth Street and Fifth Avenue North to remember the twenty eight firemen who lost their lives in the explosion.

The residents of Texas City have not forgotten about the 1947 disaster. Today Memorial Park remains open and has monuments dedicated to the victims of the explosions. There is also an annual reunion photo for anyone that lived in Texas City in 1947. The Texas City Museum also has the disaster as a permanent exhibit among others.
Memorial Park in Texas City.
​Source: Memorial Park
"The final resting place of those "Only Known to God"."4 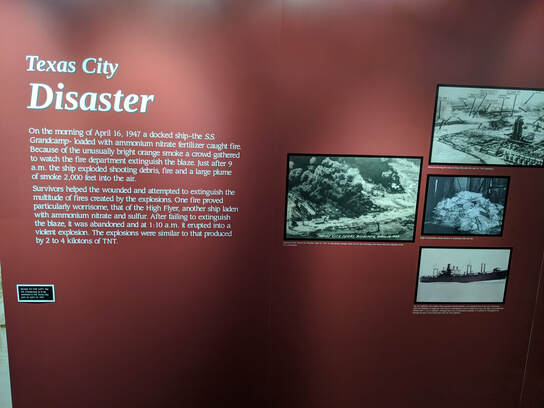